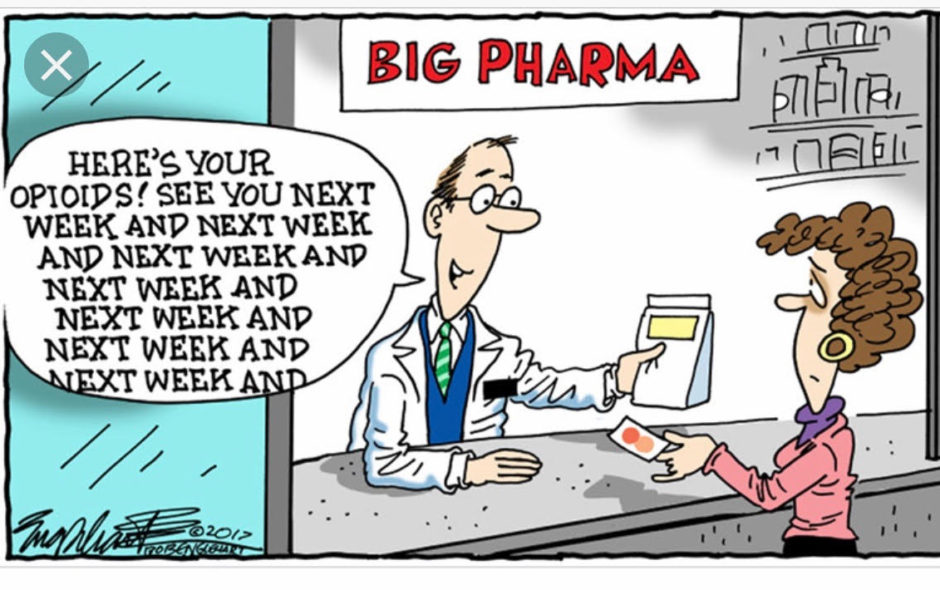 “For ten years after the drug’s introduction, in 1996, Purdue Pharma aggressively promoted OxyContin, falsely claiming that it posed little or no risk of addiction and encouraging its prescription for chronic pain—after surgeries when opioid pain relief was not warranted, and in quantities that far exceeded patients’ needs. The company provided financial incentives for doctors to encourage these practices. PAIN activists argue that the fines paid by the company, such as the six-hundred-million-dollar penalty in the 2007 New York case and several million donated to efforts to combat the opioid epidemic, are insignificant compared to the tens of billions of dollars that Purdue has made off OxyContin.” – Gessen, M. (2019, February). Nan Goldin leads a protest at the Guggenheim against the Sackler family. The New Yorker

I have known about the evil side of Big Pharma since 1991, but this case takes the cake. And let’s not forget all the cash Purdue made peddling Narcan, a treatment for the opioid addiction of their own creation. That’s next-level evil.

So many lives have been upended by addiction to a drug that was marketed as “safe.” The destruction to the addicts’ family unit and community is incalculable.

There’s a lot to be angry at these days. I can’t physically/mentally/emotionally afford to get angry about all the things; I will target all of my anger toward evils such as this.

Pharmaceuticals have saved lives, no doubt. But pushing a medication with known addiction risks, bold-face lying about those risks, raking in money as an epidemic unfolds, and then creating – and profiting from – a TREATMENT FOR ADDICTION TO THE DRUG THEY CREATED makes me want to start a riot.

Therefore, I will start a riot another way. We have to educate people to take better care of themselves so that they can avoid these types of medication. The average person knows more about how their phone works than how their body works. Yes, some people have conditions that require opioids, but many of us simply need the basics: more efficient movement patterns; a few simple stretches to unwind the tension caused by our particular habitual postures and movements; better sleep, diet and hydration; and healthier options for managing stress.

It’s not rocket science, and it certainly does not cost much money. It’s 100% free to improve your sleeping habits, for instance. The medical industrial complex cannot make money from insomnia and neck tension created by poor sleeping habits if you learn how to take better care of yourself, because those conditions can be easily be treated without pharmaceuticals. Don’t worry, they have plenty of opportunity to make money off of insomnia and neck pain caused by other reasons.

We’ve been trained since childhood that simply taking a tiny pill will magically undo all the harm we’ve done to our bodies by ignoring the aforementioned basics. We’d rather take a risky pill than change the things necessary to improve our health because we’ve been trained to do so. We can learn new ways, because we are intelligent.

Unfortunately, there will always be genetic diseases, infectious diseases, traumatic injuries, and other unforeseen, catastrophic illnesses. I am grateful that effective, pharmaceutical treatments are available in these cases. But having a sore neck because you work a desk all day is something that can easily be treated with a few basic changes in habits with no nasty, life-destroying, side-effects.

I have no idea how we get the greed out of Big Pharma; it’s a Big Problem. I do, however, know how to help people avoid pharmaceuticals as much as possible. Again, there are many conditions that require pharmaceutical interventions, but many do not. Many drugs are overprescribed, and I know many MD’s who would agree that we should all do what is within our power to avoid pharmaceuticals in the first place.

I hope to God I live long enough to see the people behind OxyContin and Narcan go to jail. I probably won’t; they’ll probably get away with little more than a relatively insignificant fine. If some poor schmuck sold this stuff on the street, he would absolutely go to jail. Meanwhile, the architects of this opioid epidemic will remain free in the mansions they purchased with the four-billion-dollars in opioid profits. It steams my ass. As I said earlier, it makes me want to start a riot.

My riot will not be in the streets. My riot will be right here, creating content to help you take better care of yourself. I will continue to post free health and wellness tips, and I am in the process of creating some inexpensive content that will teach you how to master the basics of good health.